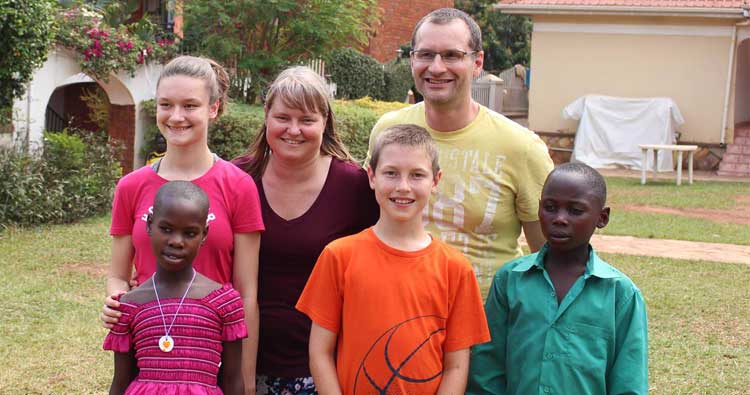 We were excited about sponsoring them and we had their pictures up on the fridge so we could remember to pray for them often.

Early in 2016 our family had the opportunity to take a missions trip to Uganda.  We asked about the possibility of meeting our sponsor children while we were there. The children are from the village of Kyengeza and we would not be going close to there on our trip.  However, Africa Renewal Ministries agreed to arrange someone to bring the children to us so we could meet them and spend the afternoon together!  We were so excited!

When we first saw them, they were shy but they soon warmed up to us and we had a great afternoon.  We learned that they were so eager to come and meet us that they barely slept the night before!  We were able to bring them a Bible, an outfit and some school supplies.  We also gave a skipping rope to Daphine and a Frisbee to Daniel.  They loved playing with the new toys.  We brought a soccer ball and some of our team played soccer with the sponsor children that came from the village.  They clearly showed that they are very skilled soccer players!!  Daphine also demonstrated her great skipping skills and was so pleased to have a skipping rope of her own.  Our daughter was able to color and do some crafts with Daphine.

We thought it would also be fun to take them for lunch.  We went to Kentucky Fried Chicken in Kampala.  They devoured the food and had ice cream for dessert.  They really didn’t know what to do with the ice cream.  Licking ice cream from a cone was not something they had done or seen before.  They loved it!

After we returned home, we received letters from them.  It was a totally different experience to read the letters after we had met them.  The letters meant so much more to us than before.  Families consider it a great blessing to have their children sponsored and have the opportunity to attend school.  I think we feel equally or more blessed to be part of such a great opportunity to change a child’s life.